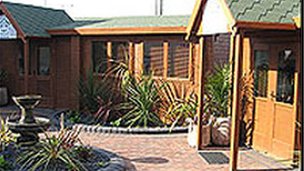 Two teenagers have been arrested over an arson attack at a Blackpool charity which provides holidays for terminally ill children.

The blaze destroyed the office, hot tubs and sauna at the site.

Lancashire police said the 18-year-olds were arrested on suspicion of arson and burglary and released on bail while further inquiries take place.

The cabins were funded by scrap dealer Gary Eastwood, who worked with the charity while he was taking part in Channel 4’s Secret Millionaire.

Donna’s Dream House was forced to close for Christmas after the fire.

It was spotted by a milkman who saw smoke coming from the courtyard of the complex on Chapel Street and alerted the fire service.